Hypocrites Against Obama – an unfunny “joke”

.
Hypocrites Against Obama – an unfunny “joke”
. 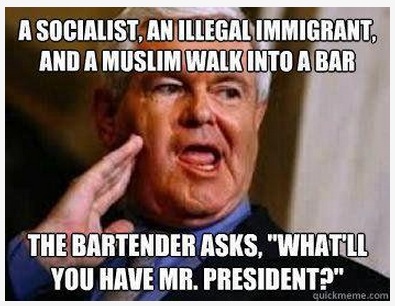 .
We all understand to whom this jab is referring. I'm not going to say one thing about politics, or Obama's politics, as I am woefully underqualified.

.
I would like to point out one glaring UNfunny in this "joke". Socialist, immigrant, and illegal aside...
It's the MUSLIM part that is SHAMEFUL !
.

and boo to any of YOU who forward it !

Nowhere in the constitution or laws does is say that you can't be President of the US if you are a Muslim. Freedom of religion, remember, folks? You certainly have the right to choose to vote for a person with the same religion as you have chosen, and free to vote for someone who has chosen Humanism as their "religion" (Atheists).
.
Whether Obama is a Muslim or a Christian is a point that is only for each voter to attach a value to, privately, in their voting booth. This is a country where the next President can be a Wiccan, a Presbyterian, a Mormon, a back-slider, or a Jew. A Satanist, a Witch, an Atheist, a snake-handling Baptist, or (God forbid) even a Catholic. (Kidding!)
.
Since it is not against the requirements for/against presidency, to include Muslim in this "joke's" list of slurs is therefore a cousin to RACISM ! It is bigotry every bit as much as devaluing someone outright just for skin color. I had better not see any black/brown/yellow/red/plaid or purple people forwarding this joke. You don't like to be judged as lesser because of skin color, then don't devalue someone for a religion. Hypocrites.
.
That leaves just the white people left. You're next. Every white person who is not a mainstream Christian had better not forward this post either. You want to be able to practice your religion without persecution? Are you Mormon, Scientologist, Wiccan, Sikh, Pagan, Atheist, or even some generic New Testament, barely defined, independent, Bible-thumping, tambourine-shaking, non-denominational Christian? If so, then you're surely one of those who is spouting “Freedom Of Religion” all the time. Uh.... doesn't MUSLIM fit into this category? It's not freedom of every religion except that one. If you want to have your religious rights respected, then you can't forward this “joke” either. Hypocrites.
.
That leaves just the white, mainstream Christian religions – those with the earliest histories in this country, nothing new-fangled. Catholic and Protestants. (The poor Jews fall somewhere in both groups – Anti-Semitism is both a racial and religious problem.) Let's start with those Catholics.... If you are going to vote/not vote on someone just because of a stated/suspected religion, and you believe that Christianity is the only true religion, and Catholicism is the one true Church in that Christian religion, then none of you should be voting for someone who is not a Christian, and not for any Protestants. One step further..... Since the Catholic Church unequivocally believes life begins at conception and stands firmly against abortion, and the Democratic party fights for the right to kill babies in the womb, then you'd darned well better never have voted for anyone who isn't a Republican ! At any level of politics, since one level often leads to a higher level - city officials, to county to state governor to Congress, to President. Hypocrites.
.
So far, you white Catholic pro-lifers can forward this joke, since you're not guilty of hypocrisy over skin racism or other discrimination, and you're the one true religion and all.... but you know that it would be a sin to treat another person this badly. And you know you're supposed to be trying to “save” a person of another religion (Muslim here), not slam them. So maybe you're not a hypocrite, but “just” sinning.
.
And so therefore falls the remaining white, mainstream Protestant Christians.
.
I have now proven that no one (except illegal immigrants and socialists) should be forwarding this “joke” which is very Unfunny. Shame on you if you do so after me pointing out the problems. It's one thing to do something in ignorance. Ignorance is not a sin in itself, as it simply “without gnosis”. You are now no longer “without knowledge” in the matter of this particular “joke” and I trust that you have enough intelligence to know how to apply it in the future, and will avoid forwarding other discriminating emails, jokes and posts relating to skin color, disabilities, religions, etc.